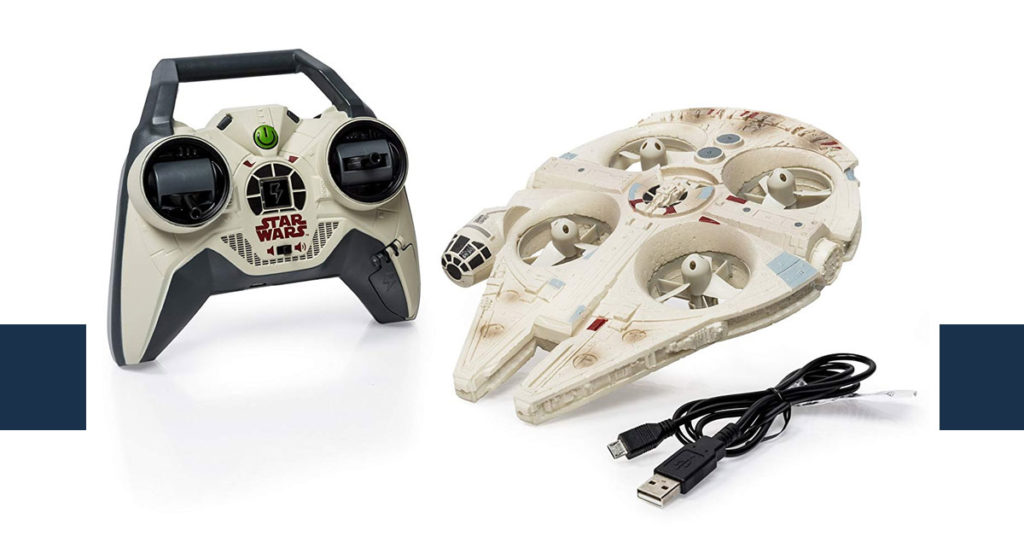 For all you Star Wars fans, in case you missed it, the Millenium Falcon Drone is a real thing you can buy now from Air Hogs.

You can fly it indoors and actually get the feeling that youвЂ™re at least Han Solo or Chewbacca against the Empire ( which could be replaced by your cat, for instance).

The body is made of sculpted foam and the propellers are quite inconspicuous so it actually looks like Science Fiction magic when flying.

ItвЂ™s a remote-controlled quadcopter by design and the transmitter itself actually comes with sound effects for a more immersive experience.

The Millennium Falcon drone features brushed motors that handle the craft easily, but nevertheless, it’s a slow flier. It could be counted as a feature, actually, since it’s a beginner’s drone and therefore less speed means fewer problems over all.

The battery will give you roughly 7 minutes of flight time, which can of course be extended with another battery set that charges while you fly. To be honest, it’s so much fun with all the sounds and lights that this time passes very quickly. So yes, another battery set comes in very handy.

The drone, as we said, is targeted towards beginner fliers. As such, smaller radio range is acceptable, and in fact the range is around 50 meters. Which is more then enough for fun.

You guessed it, Star Wars fans are first on the list. Other than that, beginner fliers are the real target audience for this drone.

It is by design a slow-flying, very stable machine, which again is targeted towards beginners. In the tests, it actually showed that it starts to wabble a bit when you want to fly it faster. You’ll have to keep that in your mind at all times, so you can avoid nasty surprises. 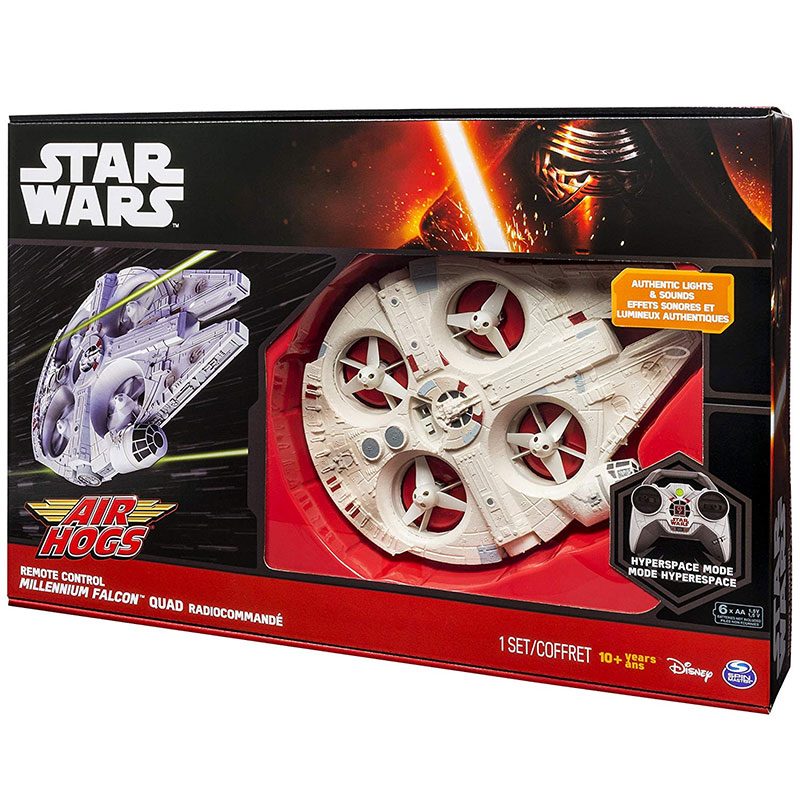 Housing is made of sculpted foam, which gives it a good crash resistance. The Millennium Falcon will easily survive most of the indoor crashes without a scratch, but if you let it fall down from 30 meters – well, good bye, drone.

The transmitter for this drone is a little bit more special than what you can find on most other toy drones.

It comes with a pretty unique charging system that allows you to charge the drone itself from the transmitter through a cable found on the right arm of the controller.

The controller itself works with 6 AA batteries and you can actually charge them if they are chargeable with another separate USB cable thatвЂ™s included in the package.

A pretty fun and unique addition is that it comes with included sound effects, so you might hear Chewbacca screaming from time to time or random laser sound effects.

In my opinion, it still isnвЂ™t as great as the controller sound effects from the Propel Star Wars drones, but it will still get you into that Star Wars mood easily.

For one, the Millennium Falcon was not built to endure heavy winds. Consider the “real machine” also – it mostly engaged in the space vacuum.

That being said, it actually does not like wind at all, so you’ll have to wait for nice weather if you want to take it outside your living room. Other than that, provided that its slow flying characteristics don’t bother you, there’s not much on cons for this lovely drone.

The Millennium Falcon drone is priced relatively low. It’s been lower and it’s been higher since it was presented, but that’s life. I don’t really know about availability: for now, it’s available and ships to most of the countries, but who knows.

A very nice toy, especially if you’re a Star Wars fan. With included sound effects, you’ll have hours and hours of fun with it, just don’t forget the extra batteries.

We enjoyed it a lot.