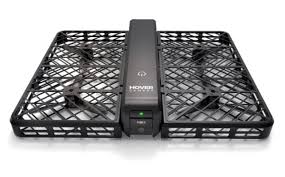 Over the past couple of years, drones have evolved. Lately though, looking at the current market, it’s pretty obvious that we are getting into a somewhat new era. Instead of companies stuffing their drones with every feature available to them, they are starting to build them with features and specifics that target the particular type of use. You can now buy drones specifically for filmmaking, racing, FPV, and so on and on. Take this one, the Hover Camera Passport Selfie Drone as an example – this is a very good example of this trend. This isn’t your “jack-of-all-trades” type of drone – it was specifically built, as the name suggests, for taking selfies and follow-me footage.

The design happens to be one of the most significant features of this drone; it’s foldable and for this reason, it is one of the most portable drones currently you can buy on the market. It was intentionally designed to fit in a small purse or backpack so that you have it by your side whenever you need it in the field.

The camera on Hover Camera Passport Selfie drone is pretty decent – it comes with one already mounted, of course. It takes still images at 13 megapixels and shoots video in 4K, which is a major bonus. However, the camera isn’t as interesting as what’s mounted behind the scenes.

Also the package, the Passport comes with a large array of autonomous filming/flying modes. You have the standard ones, such as Follow and Orbit, but really, you cannot look past the neat 360 Panorama function that can be activated with a touch of a button. You also have what is called Beast Mode. Through this Beast Mode, you will be able to turn off the drone’s software-imposed limitation for when you need to follow objects quickly.

When it comes to the build quality of the Hover Passport, we have just good things to say; it is, without doubt, one of the most brilliant designs we have ever come across on a consumer drone. It is designed to fold up just like a book. So, whenever you’re not flying it, you can easily fold it up and carry it around in a backpack or even a small purse.

There’s a slim “spine” that is responsible for housing the electronics as well as a pair of enclosed propellers that are tucked under the spine. Those swing out like pages of a book. When it’s closed up, it is only 1.3 inches tall – it has close to the same dimensions as a VHS cassette. Also, it only weighs 0.53 pounds, so when you put it in your purse or backpack, you won’t even know it’s there and that is with the battery included.

The Passport’s carbon fiber prop cages is another feature we like a lot on this drone – it offers numerous advantages. For one, they protect the propellers from running into hard obstacles, thus preventing damage to them.

Secondly, the prop guards come in handy because they protect the user from getting hit by spinning blades; the drone is safe to launch from your hand or when it’s flying in the air, you can easily pluck it out when you’re done flying. It may seem like a small feature, but safety is a big concern.

If you’re looking for a specifically designed drone for selfies and also safety is a concern, then the Hover Camera Passport Selfie Drone is a winner. The build is incredibly high quality and it has a great camera attached – you really cannot go wrong with this one.