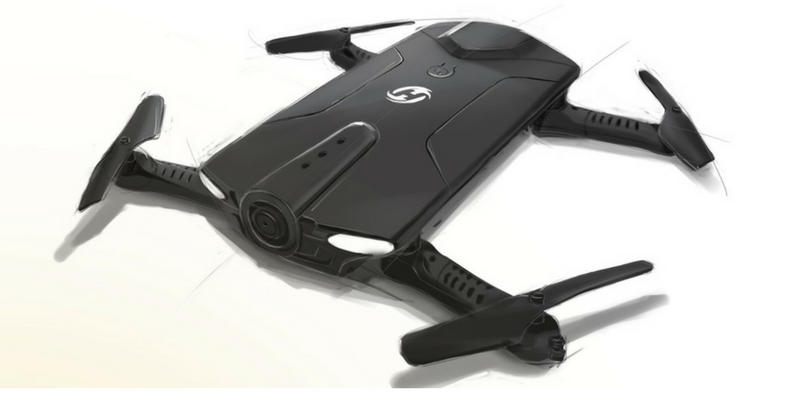 The Holy Stone HS160 Shadow is marketed as an indoor drone mostly targeted at kids and beginners. I would pretty much agree with this but even those who have being flying drones for a while might like to purchase the Shadow as a fun indoor drone that can be easily transported and flown quickly.

Holy Stone have an excellent customer service and users who had purchased the drone and had issues with it were promplty dealt with.

It’s a very lightweight drone, so should primarily be used indoors. If you are going to use it outside we would suggest getting plenty of practice indoors first and only fly it in calm weather, as the slightest breeze is going to effect this drone substantially.

As the drone is very small and lightweight it is great as a portable drone to carry around with you this is made even easier by having prop blades that fold up making it less easy to damage the drone and also easier to transport.

Setting up the drone is very easy if you follow the included instructions which are very detailed. If it is your first time flying a drone then it might take some getting used to, but that is standard with most of drones. Many reviews have mentioned kids as young as 9 years old having fun learning to fly the Holy Stone Shadow. The games console style controller will make it very intuitive for many of them.

The Shadow has 4 different flight speeds so depending on how experienced you are you can set it for the speed that suits you.

Other features such as the one key start and landing button and the gravity sensor function which allows the drone to be guided by the movement of your smartphone put it a little bit above other similar priced drones.

Charging the battery takes around 45 minutes and once charged flies for around 5-6 minutes. Holy Stone have included a second battery that will double your flying time but to get the most fun we would suggest maybe buying a couple more batteries. Adding and removing the batteries from the unit is simple, fast and frustration free, they just slide in and out.

Holy Stone have done a pretty good job here of providing some nice accessories and spare parts. Besides the spare battery you get spare propellers and some other parts that might be needed down the line. The package also comes with a phone holder and USB charger. The actual transmitter takes 4 AA batteries that are not included.

The Drone also comes with a FPV [First Person View] camera that does a reasonable job when taking video or stills. Obviously the price dictates the quality but for the money is fairly good.

If you have a VR headset set you have the option of  using the Shadow in 3D VR Mode.

All in all customer reviews online are positive those who had problems praised the Holy Stone Customer Support. Many users did mention that this is a very small drone and they were actually surprised how small it was. This didn’t seem to matter though as they also liked how compact it was for easy portability. It was also mentioned that the drone can’t perform tricks such as 360’s which some similar priced products have as a feature.

Even though the drone is small and lightweight it appears to be durable and it would be a fun drone to use indoors when the weather is bad. While some customers received defective products they were dealt with quickly by Holy Stone customer service. They get great feedback for their helpful staff. This would make a great first drone for a child or adult new to drones so they can get their flying practice indoors before venturing into the outdoors with a more expensive drone. Many owners of existing Holy Stone drones added the  HS160 Shadow to their collection.