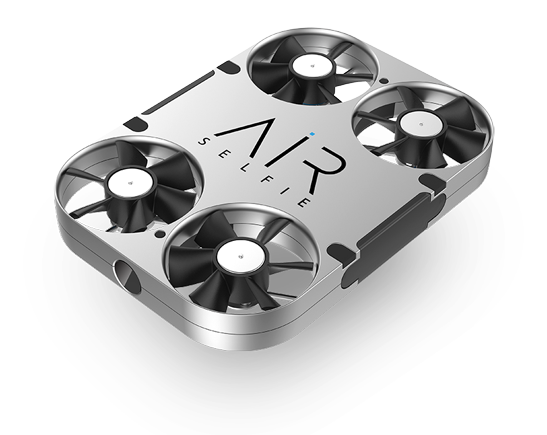 The EyeSee drone was an interesting drone because this shows me that drones aren’t just used for fun, they can also be used to make jobs easier. In this case, the EyeSee is a drone that can be used in a warehouse for taking inventory and all of that fun stuff. Apart from using drones for fun and for work, as many of you know, you can also use drones to take pictures and I know what some of you are thinking of right now …selfies. Yes, selfies are obviously a big thing in this day and age and I knew in due time, a drone company would come out with a drone that was specifically for taking selfies. There’s the AEE Selfly and the AEE Air Selfie, and today, I am here to tell you about the AEE Air Selfie.

About the AEE Air Selfie

Basically, the AEE Air Selfie is a portable flying camera that has been developed for selfie lovers. Who would have ever thought we would see the day when cameras could fly?

Over the past two years now, selfie sticks have been a big trend and to be honest with you, I find them a bit annoying. There’s just something about having to use a stick to take a picture. So, when I saw the AEE Air Selfie, I knew right away that it would be a big hit.

The drone is small in size, as expected. I feel that it is smaller than the standard smartphone. It only weighs 52 grams, which is a bonus, because you can carry it around just as you’d carry a camera around, without having to worry about a bunch of extra weight.

The main idea of the AirSelfie, of course, is taking selfies from above. It can actually take pictures up to 60 feet above you, so it’s the perfect drone for taking group selfies. The drone works great indoors and outdoors and it is easy to use.

When you take the drone out of the cover, you can use the AirSelfie app on your phone in order to launch it. When you have the drone in the air, there are three flight modes you can use and they are:

With this mode, you will be using a virtual joystick in order to control the drone in real time.

While in this mode, you will have two directional buttons that you can use in order to have the AirSelfie move far away or closer to you.

With this mode, using the hovering function, you can take the perfect photo. Using this feature will make the drone hover in the air for an even better shot.

Another interesting feature that iPhone lovers will like would be the fact that this drone automatically connects to Apple iPhones.

As soon as you have taken your photos and videos, you can post them on social media. All of the videos and photos will be automatically sent over to your smartphone via WiFi and will show up on the app. From the app, you can choose which ones you would like to upload to your social media platform.

The AirSelfie pictures and videos are pretty good quality. It can take video at 1080p and pictures at 5 MP, which is decent. The images can also be saved to a MicroSd card.

All in all, if you’re a selfie lover, then the AEE Air Selfie is made for you. The photos and videos look great and since it can fly up to 60 feet and you can control the shot using a smartphone in order to achieve the best angles, it’s not bad at all. There’s even a nice 10-second delay time for group photos.